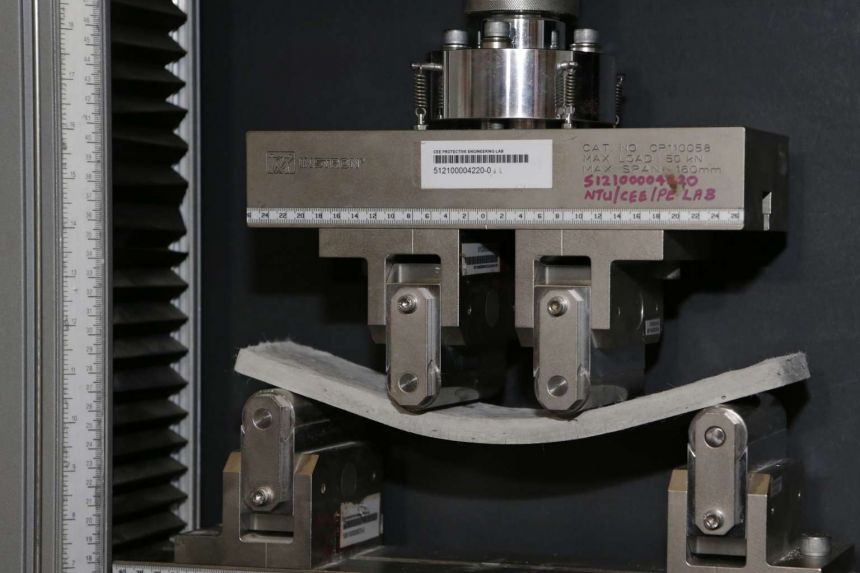 Disclaimer: This is rehashed from an article I wrote in October 2016 for GineersNow. Some parts are added or edited for clarity.

Civil engineers know that reinforced concrete is a material that combines concrete and steel bars, utilizing the compressive and tensile properties of both, respectively. As a construction material, it resists different kinds of loads, which is suitable in building parts of any structure from its foundation and up. It has economic, durability, and workability advantages.

Reinforced concrete is also known to be a rigid material, meaning it can’t be forced out of shape once it has been formed. It has always been steel reinforcing the concrete to get its structural strength. But that has changed now, as there have been attempts to make concrete bendable but still, in some way, reinforced

In 2005, researchers from the University of Michigan have produced a concrete that is like a regular concrete on the surface, but has a secret aggregate embedded in it: fibers.

Called the Engineered Cement Composites (ECC), it has fibers which comprise about 2% of the mixture’s volume and offer maximum flexibility which cannot be found in other concrete. That material has made the concrete 500 times more resistant to cracking and 40 percent lighter in weight, under lesser costs.

The bendable concrete they made is composed of the same materials like that of conventional concrete but without the coarse aggregates. Introduction of the coated network of fibers has allowed this concrete to give in to excessive strain, sliding with cement. It removed the brittleness and breakage brought about by its inflexibility.

To compare more with traditional concrete, the ECC doesn’t suffer from lack of durability and sustainability, failure under severe loading, and the resulting expenses of repair.

Fiber-reinforced concrete has been around for a while now, with Michigan researchers working on it for 10 years. They have perhaps developed the superior kind during that time when they introduced fibers to reinforce the concrete with microscale fibers that act as ligaments to bond the concrete more tightly.

This technology is already in use in Japan, Korea, Switzerland, and Australia, and still to flourish in the United States. One project that used the bendable concrete is the Mihara Bridge in Hokkaido, Japan, which has a 5 cm ultra-thin deck of ECC. Staying away from conventional concrete has made the bridge 40% lighter, with an expected service life of 100 years.

Victor Li, an engineering professor from the said university with appointments in the departments of civil and environmental engineering and materials science and engineering, led the study. He said, “The broad field of micromechanics has tried to understand how composite materials behave. We went one step further and used the understanding as a material design approach in the development of ECC.”

This study has been followed by the Nanyang Technological University (NTU Singapore) through the NTU-JTC Industrial Infrastructure Innovation Center with their new type of concrete called the ConFlexPave.

It has similar composition, but they specifically engineered it to mix hard materials with polymer microfibers. It is focused as a material for precast pavement slabs. Other than allowing the ConFlexPave to flex and bend under tension, it enhances skid resistance.

Leader of the research, Assistant Prof Yang En-Hua from NTU’s School of Civil and Environmental Engineering, shared that selecting ingredient and engineering the tailoring of component can yield specific requirements for road and pavement applications.

He added, “The hard materials give a non-slip surface texture while the microfibers which are thinner than the width of a human hair, distribute the load across the whole slab, resulting in a concrete that is tough as metal and at least twice as strong as conventional concrete under bending.”

Unlike the ECC, the ConFlexPave has been successfully tested in the NTU laboratories. Further testing will be done to scale up the tablet-sized slabs which were used in the experiments.

In all, the world of reinforced concrete is never the same with fibers changing the technology. It will reduce labor intensive on-site work, enhance workers’ safety, and reduce construction time, all of which are in favor for engineers.