Home » A Genius is Born: 4-Year-Old Boy is Able to Solve Basic EE, Among Others

A Genius is Born: 4-Year-Old Boy is Able to Solve Basic EE, Among Others 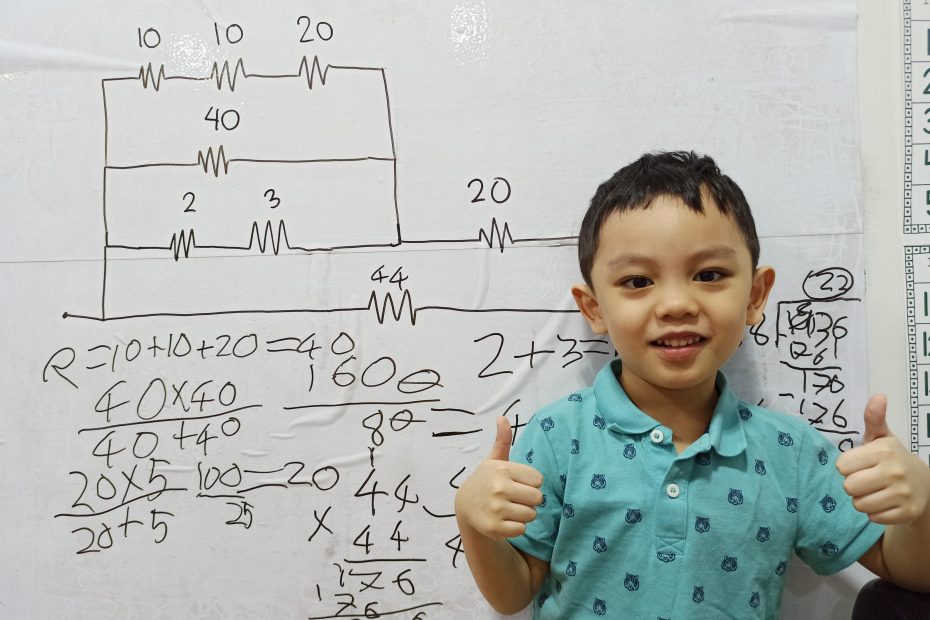 Any engineering curriculum starts with the basic mathematics including algebra and solid geometry. The major subjects, which include topics and design projects specific to the course, are then taught on the third or fourth year in college.

But if you can understand these complicated things as young as four years old, you have a gift. Others call these as prodigies.

One of them is Marius Constante, a Filipino boy genius.

At the tender age of 4, he is already capable of understanding exponents, factorials, and prime factorization in algebra; area and volume computations in solid geometry; mixed resistor computation (series and parallel) and LED circuit assembly in basic electrical engineering. He is taught and influenced by his mother Mary Ann Constante who is an electrical engineer and alum of University of the Philippines – Diliman.

According to Marius’s mother, all of this was a recent revelation.

After catching the Omicron variant of the COVID-19 virus this January 2022, both parents of Marius have been forced to stay at home. With nothing much to do, noticing their little Marius was bored while counting to thousands and adding numbers, they tried to teach him long and big number addition.

To their surprise, Marius caught up quick on the concept. From there, they tested their boy’s capabilities and discovered there is more to Marius’s gift than long and big number addition: to date, he played, or experimented, with an Arduino after being introduced by his mother and was able to modify the code to light only certain pairs – all on his own.

This display of memory and logic manifested in other areas, such as being able to memorize his mother’s phone number in less than five minutes and reciting from memory the 10 digits of pi in just one sitting. In February 2022, Marius was enrolled in piano lessons and was told that he progressed faster than usual, already able to read and memorize music sheets only after 11 sessions. He can also play basic pieces by himself.

Marius also has a knack with Sudoku, proving to complete a 9×9 square, again, with no one to help him.

Engr. Constante admitted that her son struggled a bit in his ability to speak. Before Marius turned three, he rarely talked.

What he lacked in the speech aspect was overcompensated with his gift for puzzles and numbers. Her mother revealed that the frequent watching of NumberBlocks and several other educational YouTube channels might have triggered it all. It marked the start of his interest in what he is capable now.

“We were amazed with his progress considering that we only introduce new concepts to him once or twice a week,” said Engr Constante who is currently a researcher at a Philippine space R&D program called STAMINA4Space. “We only do short reviews everyday to test if he understands or remembers his lessons,” she added.

Currently, the proud parents are documenting this gift of Marius through a YouTube channel called MariusLab, some of which are below. Check out their other videos in this link.

At this point, there is still so much left undiscovered of what Marius can do. Letting him take psychometric tests to understand his potential further is still being discussed.

But being able to assemble an LED circuit and to compute mixed resistors? That already says a lot about Marius’s massive potential.