Home » Filipino Inventor Claims an End to Use of Petroleum, Coal, and Batteries with His Own Version of Tesla Coil

Filipino Inventor Claims an End to Use of Petroleum, Coal, and Batteries with His Own Version of Tesla Coil 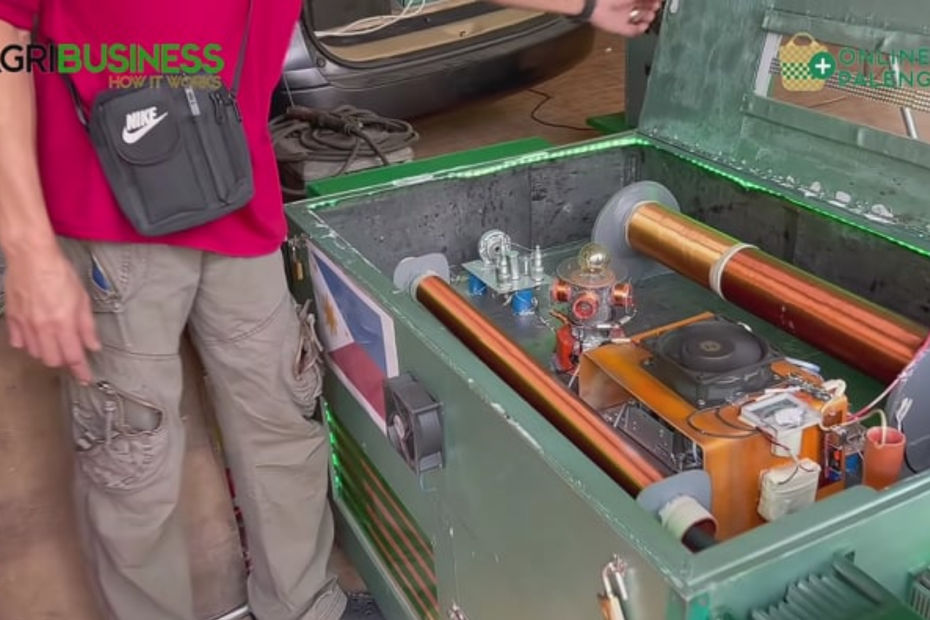 Filipino pride is okay, in fact well celebrated, but it has certain limitations. Like when you claim that you will end the world’s energy crisis with an invention of an ‘electric power generator’ but with no technical proof or documentation whatsoever.

The comments section of below YouTube video created by Agribusiness How It Works is filled with high energy, commending and applauding the featured inventor Elias Delos Santos for his ingenuity.

Translated as “The Forthcoming Death of Petroleum, Coal, and Battery with the New Filipino Invention,” its title screams (quite literally with all the exclamation points) but the core of the invention is quite dubious – especially for electrical engineers who know their thing.

See for yourself and watch the entire feature here:

A certain Reddit user u/Reddi_34 over r/ElectroBOOM has pointed out what it really is and what it is not.

To summarize, the inventor claims that the ‘generator’ gets its power from captured ambient radio waves or frequencies. It is said to work by stepping up the gathered electromagnetic energy then stepping down the output to 220V/60Hz.

Such is displayed by using a Mitsubishi Pajero jacked on a stand, with the car’s engine, transmission, exhaust and fuel system removed. All these components are replaced with a window-type air-conditioning unit.

“The rear differential is supposedly directly mated to a 10hp AC motor. The front AC motor is supposedly for the power steering and brake booster,” the Reddit user said.

As shown in the video, the rear wheel is put to a spin to show that the battery-less system works and that the wheel speed can be regulated through a variable frequency driver.

The engineer claims further that it is powered by a “Tesla coil” of their own version, and that theirs do not need electricity because it is the one providing the power. Well, that is new.

The transmitter coil supposedly acts as the main energy gathering device and transmits it to the receiver coil. All of this happens within a lead-line compartment to prevent arcing, they said.

It was also mentioned that the project started in 2016, spending a total of P 62 million to date. Its team of engineers managed, as they told, to have their invention demonstrated in front of the Department of Energy and the National Electrification Administration.

Various iterations of the system are seen in the video which means to say that the project was subject to a lot of experimentation. Their industrial grade model featured panels, switches, and what looks like a WiFi antenna.

To cement the Pinoy pride, the exterior is placed with a Philippine flag sticker.

Delos Santos convinces its viewers in the second and third video below from the same channel that much of his appliances at home including AC units, refrigerators, and washing machine are connected to the generator, but the entire house is still wired to the main power lines.

A patent is being applied for this system as of the third video to legitimize the invention.

Checking the comments in the third video, a certain Edwin Ponsica pointed out that the unit should undergo load test.

Another YouTube user Jonathan Factor commented, “Battery + Generator + Step Up Transformer = Amplified Energy. The CAPTION NO BATTERY IS INCORRECT!! There is always a Prime Mover. In this case, the inventor has reduced to the maximum level of friction the generator has, enabling a self-sustaining perpetual power generator.

Again, Filipino pride is okay. We are going to celebrate when it deserves it.

But this one isn’t it.

What do you think about this?

Screenshots via Agribusiness How It Works

35 thoughts on “Filipino Inventor Claims an End to Use of Petroleum, Coal, and Batteries with His Own Version of Tesla Coil”