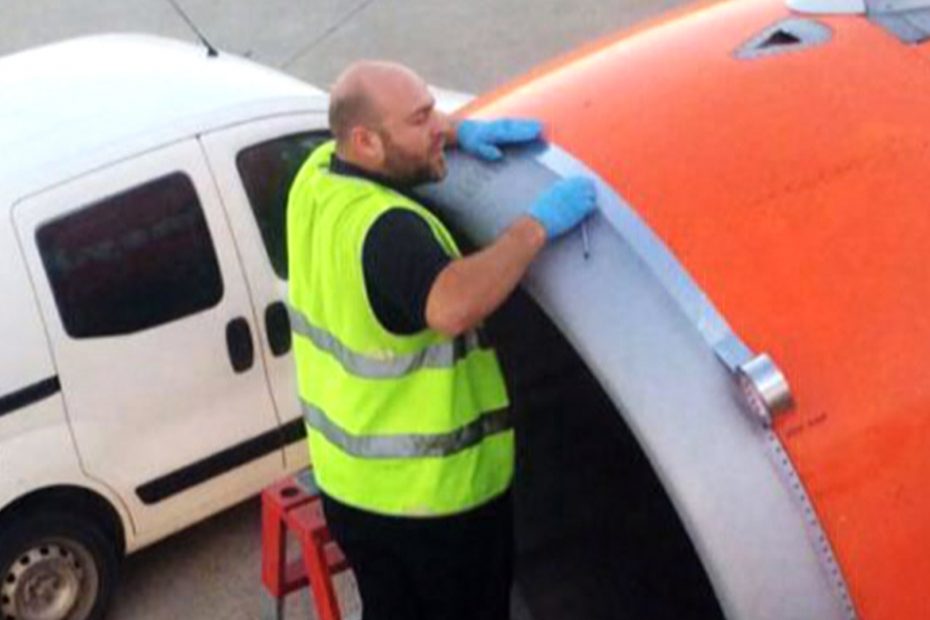 When you see a guy repairing the engine, using only what looks like a duct tape, of the airplane that you are riding while being asked to wait due to a “minimal technical fix,” what would you do?

For a passenger aboard an easyJet bound for Berlin at Amsterdam’s Airport Schipol, it had to be filmed for others to see.

Perhaps the passenger, who was extremely shocked at the sight of the repairing that was going on, wanted to startle others by saying that it was duct tape that the aircraft engineer had used.

There is not much to do now about the video that has gone viral, but all of us could learn a lesson or two in this incident: the truth of the matter is that it isn’t duct tape that is used in such airplane engine fixes.

According to those who have seen how the “minimal technical fix” was managed, the aircraft engineer climbed up to the engine shell, removed some tape already in place, cleaned the area with alcohol, and laid the fresh tape down.

“It really seems that the tape was there for mechanical reasons and not for the looks,” said the one who recorded the video.

But really, this is normal procedure.

It was indeed for mechanical reasons, and again it was not just any tape, or a duct tape for that matter – it was a high-speed metallic tape.

Such is used to carry out minor repairs on aircraft and racing cars. It is typically for temporary repair until a more permanent repair can be carried out.

“EasyJet occasionally uses this high-speed metallic tape, which is always used in accordance with the approved aircraft manuals and repair processes, and in no way compromises the safety of the aircraft,” said a spokesperson for the airline operator.

“The safety and well-being of passengers and crew is always easyJet’s priority,” he added.

Disclaimer: This is rehashed from an article I wrote in December 2017 for GineersNow. Some parts are added or edited for clarity.