Home » A Foldable, Portable House That Unfolds Itself by Pressing a Button

A Foldable, Portable House That Unfolds Itself by Pressing a Button 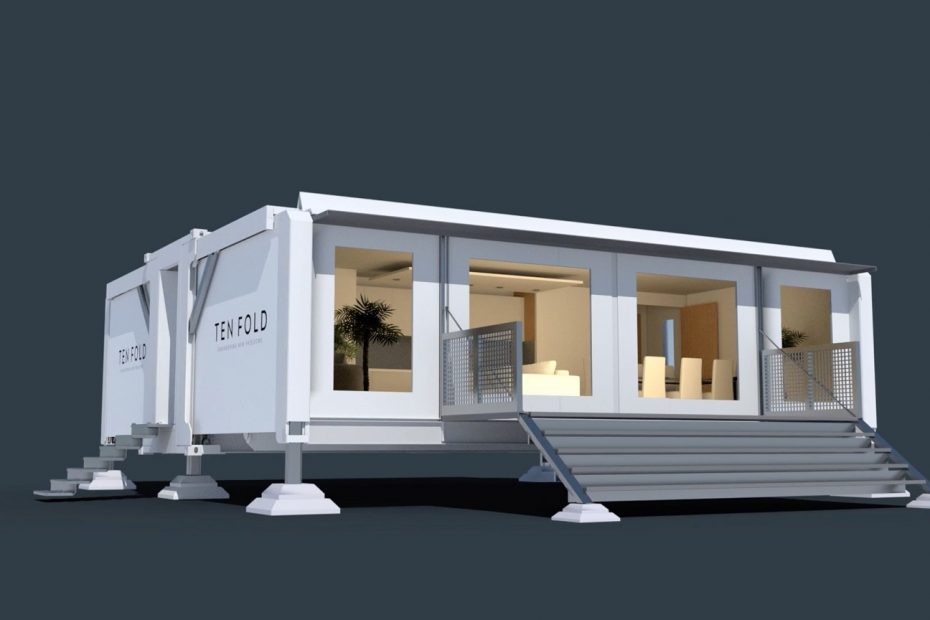 Talk about being a person with no permanent address or a fixed house.

This might be the trend in the future as the construction of residential buildings or houses moves into portable and foldable, at least according to the vision of a company called Ten Fold Engineering. They describe their masterpiece as Tenfold, ‘the fully expandable mobile structure.’

This is after they developed a technology that enables a box-like structure to reveal itself and form into a house in full form. Notably, doing this does not require any machine, labor or foundations. Everything happens by just pressing a button on a handheld battery-powered drill.

It happens quite fast too: it only takes around 10 minutes to unfold the foldable house into 3 times its original folded size.

Based in the United Kingdom, the company is headed by David Martyn. “We wanted to do something new, but at the same time, we wanted to challenge people to think differently about structures,” he said.

“We live in houses that are stuck in the ground. We aren’t a nomadic culture anymore, so this is a new concept based on a modern interpretation of nomadism as it relates to the global economy.”

Ten Fold Engineering takes advantage of modular, self-deploying housing technology. This means that it each section of the house is designed in such a way that they can be fixed together much more easily than traditional house construction. Modular homes are not exactly a new technology, but this is one of the first to venture into houses that are foldable, portable, and enabled by just a button.

Being portable, the house only needs to be transported by a truck and it can be placed anywhere. The required area to clear for this house is up to 64 square meters. In this space, you could already have 20 square meters allotted for furniture or other appliances.

According to Ten Fold Engineering, the technology allows not only for residential units. It is able to construct structures that are able to serve as an office, clinic, shop, or even restaurant.

The estimated price for each Tenfold house is pegged at $130,000, but this varies on size.

As of writing, the company is still in pre-production according to its website, targeting to launch in Q4 2021.

Would you buy this house?

previousConfirmed: Calculus is Most Hated by College Students
nextA Chemical Engineer Top 1, Against All Odds